Tech mistake |The number of public pay phones continues to dwindle each year. Though they may be largely ignored by cell phone owners, there are still plenty to be found, provided you know where to look. As CityLab points out, telephone providers still keep pay phones in operation where they are cost-effective. Neighborhoods with a high number of immigrants who rely on calling cards to phone overseas rather than using cell phones are a good place to look, as are locations where large numbers of people pass by or congregate. 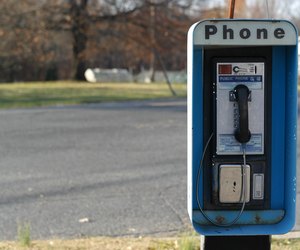 As technology develops, the standard old-fashioned public pay phone may be replaced with newer ways to communicate. For example, in 2015, the Verge reported that New York City started replacing public pay phones with 10,000 Internet pylons, which offer free Wi-Fi, free cell phone charging and free local calls, including 911 and 311 calls. Passing by, you might not recognize these billboard-sized pylons as phones at all. You can now look for a keypad and handset nestled in the pylon’s edge thanks to the city’s LinkNYC project.

Video of the Day

Depending on the city or region where you’re looking for a payphone, you may be able to find map guides that show the nearest payphone, including the address and pay phone number. There are two websites devoted solely to locating pay phones, Pay Phone Directory and Payphone Project. Locate your state or region and scroll down to the city you’re in to see a list of recommended websites. Use online resources as a guide, but keep in mind that even if a pay phone was in a specific location last year, or even last week, it may not be there today.

Shopping malls often have public pay phones. The most likely pay phone locations are just inside the main entrances or near the customer service kiosk. Phones are usually in good repair here, since malls usually have security and lock the doors at night. Of course, you need to get there before the mall closes.

Courthouses and police stations are also good places to find a phone. This makes sense: There are lots of police officers around, so there’s little chance of vandalism, and robbery victims and people trying to arrange bail create a high demand for pay phones. A public library is a good bet as well, as are transit stops. Museums, art galleries, tourist information centers and anywhere else tourists might gather that are funded by the municipality are almost guaranteed to have a pay phone inside.

Gas stations, fast-food restaurants and convenience stores are still common pay phone locations. Those that are open 24 hours a day always have someone around, so the odds of vandalism are lower than those that are closed after dark. If you’re unable to find a phone outside, pop your head in the door to take a look for one inside before going on to someplace else.

After losing half its value, Nvidia faces reckoning

Security Economics: The Key to Resilience