What is the ‘Dow Jones Industrial Average – DJIA’

Tech mistake |The Dow Jones Industrial Average (DJIA) is a price-weighted average of 30 significant stocks traded on the New York Stock Exchange (NYSE) and the Nasdaq. The DJIA was invented by Charles Dow in 1896.

Often referred to as “the Dow,” the DJIA is one of the oldest, single most-watched indices in the world and includes companies such as the General Electric Company, the Walt Disney Company, Exxon Mobil Corporation and Microsoft Corporation. When the TV networks say “the market is up today,” they are generally referring to the Dow.

Named after the index’s founder Charles Dow and his business partner Edward Jones, the Dow Jones Industrial Average was designed to serve as a proxy for the broader U.S. economy. When the index launched, it included just 12 companies that were almost purely industrial in nature. The first components operated in railroads, cotton, gas, sugar, tobacco and oil. General Electric is the only one of the original Dow components that is still a part of the index in 2018.

As the economy changes over time, so does the composition of the index. The Dow typically makes changes when a company experiences financial distress and becomes less representative of the economy, or when a broader economic shift occurs and a change needs to be made to reflect it.

How the Index Is Calculated

The Dow is a price-weighted index. This means stocks with higher share prices are given a greater weight in the index. At the Dow’s inception, Charles Dow calculated the average by adding the prices of the 12 Dow component stocks and dividing by 12. Over time, there have been additions and subtractions to the index, such as mergers and stock splits that had to be accounted for in the index. When one of these events occurs, the divisor for the Dow gets adjusted so the index’s value does not become affected. This is why the Dow can stand at 17,000 while the sum total of the components’ stock prices is nowhere near that number.

Changes to the Index Over Time

The index grew to 30 components in 1928 and has changed components a total of 51 times. The first change came just three months after the index was launched. In its first few years until roughly the Great Depression, there were many changes to its components. In 1932, eight stocks within the Dow were replaced. However, during this change, the Coca-Cola Company and Procter & Gamble Co. were added to the index, two stocks that are still part of the Dow in 2018.

The most recent large scale change to the Dow took place in 1997 when four of the index’s components were replaced. Two years later, in 1999, four more components of the Dow were changed. The most recent change took place on June 26, 2018, when Walgreens Boots Alliance, Inc. replaced General Electric Company.

Components of the Dow

The table below alphabetically lists the companies included in the DJIA as of August 14, 2018: 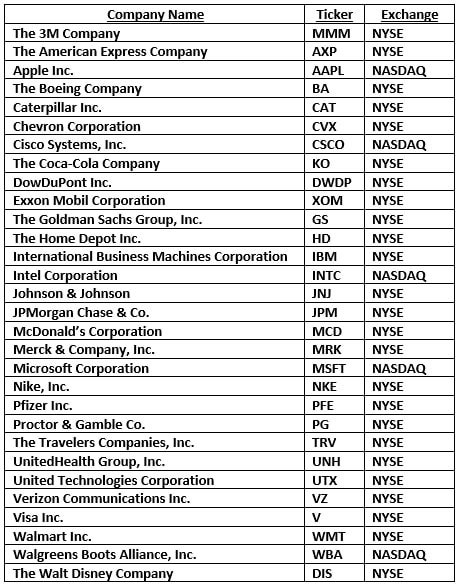 Key Historical Dates for the DJIA

The following are some of the milestones hit by the DJIA:

Most innovative accessories and Gadgets, designed for corporate travellers

What Is Gamergate, and Why? An Explainer for Non-Geeks